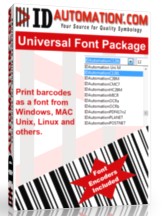 Generate Code 128 and other linear barcodes from a single font on Mac OSX, Windows and more with the IDAutomation Universal Barcode Font Advantage Package (TM).

Data Matrix is a popular 2D barcode symbology that is capable of encoding much larger quantities of data than standard linear barcodes - The data encoded in a Data Matrix barcode may include text letters, numbers and actual bytes of data such as extended characters, Unicode characters and even small images - Consider restricting the data-to-encode into each symbol due to the fact that many 2D barcode scanners have difficulty reading barcodes that contain more than approximately 800 characters of data.